ANZGITA's teams provide intensive training programs at the National Referral Hospital located in Honiara, the Solomon Islands' capital. Solomon Islands is a special place for US vascular surgeon Eileen Natuzzi, who established relations and originally engaged the ASGE Ambassador Program in skills transfer in 2011. When that program drew to a close, ANZGITA became involved in 2014 and now Dr Mark Norrie shares Program Leader duties with Eileen.

In July 2021 we were offered a $15,000 donation in memory of Dr Tenneth Dalipanda, a former Permanent Secretary of Health in Solomon Islands. It will be used at the National Referral Hospital (NRH) to further develop hepatology services and, immediately, for a computerised database for the hepatitis clinic. Sascha Piggott, a former colleague, described Dr Tenneth as a caring, gentle and humble man who had dedicated himself to the healthcare of his people. The donation came from monies raised to assist with the cost of his medical treatment but, unfortunately, he died before it could be used. It is rather poignant that the funds will be applied to the prevention and treatment of the illness which took his life.

In 2019, two intensive training programs, each a week long, will again be conducted. The first in March has already occurred and was exceptional for the commissioning of the new Endoscopy Unit with its centre piece the new Endoscopy Theatre. Dr Elizabeth Wore facilitated the March program and largely took responsibility for many aspects of it. There was a steady flow of patients through the work to enable valuable training. Our nurses were also able to organise the storage of the accessories and equipment for on-going operations.  Having reached this stage of development, senior NRH medical staff are keen to develop gastroenterology as a speciality and see services developed in the provinces. Prof Macrae, ANZGITA Chair, offered to support in these endeavours. 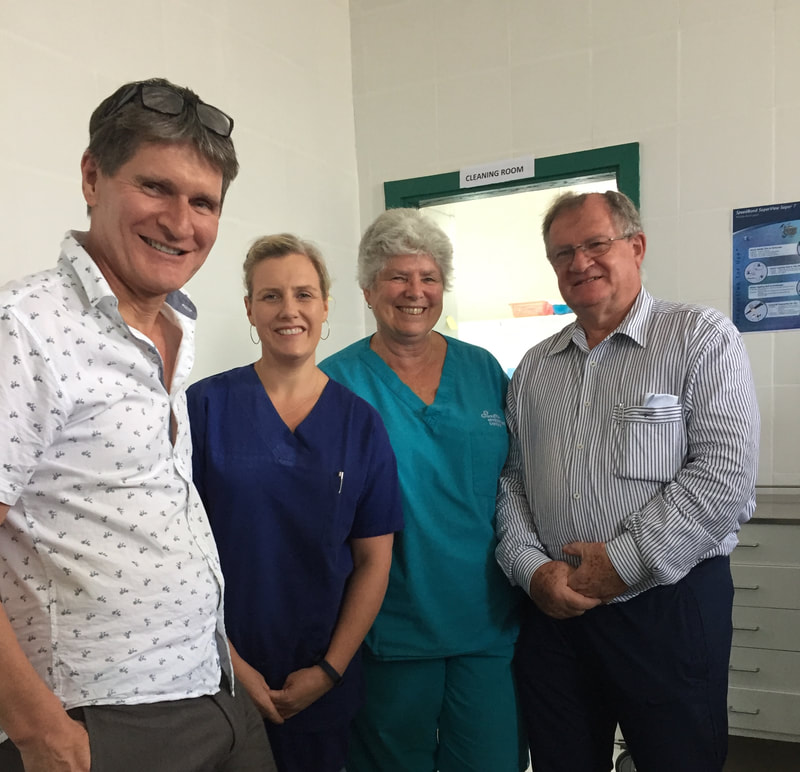 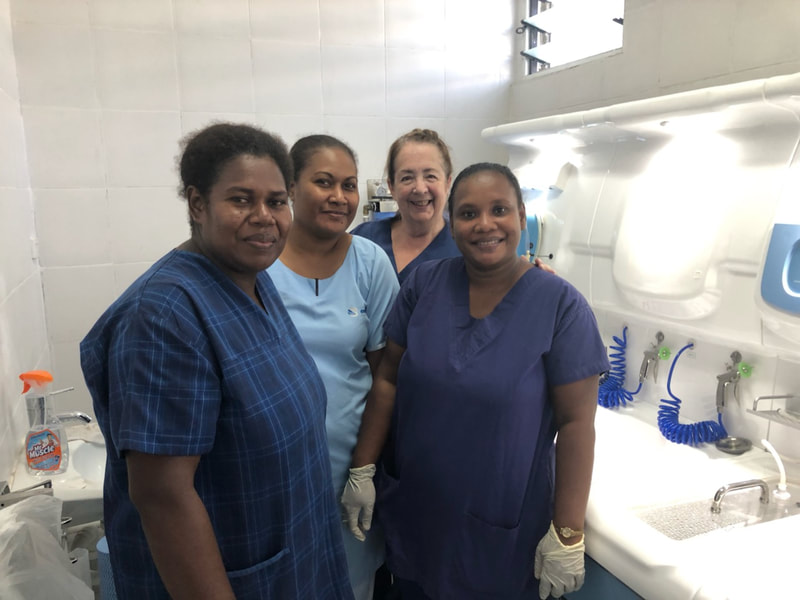 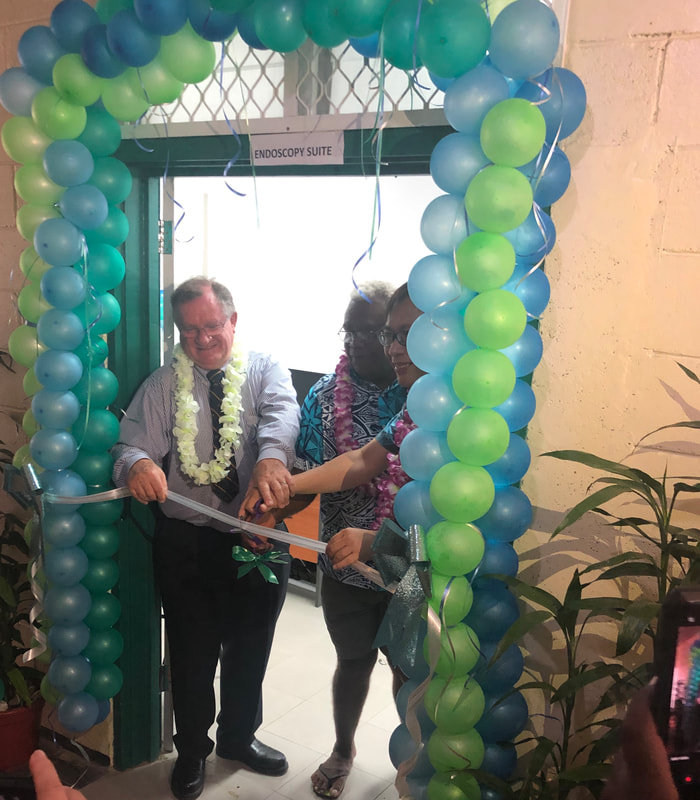 Prof Finlay Macrae, Dr Steve Aumanu, NRH CEO & Mr Oliver Weng, Taiwan Embassy officially open the new endoscopy unit
The new unit at NRH has been completed ready for on-going operation and the training programs. As well as offering advice and support along the way, we've shipped additional equipment to support the fit out.
Eileen Natuzzi gained the support of a NFP foundation she is associated with, set up by US WWII veterans' families, to fund two new electric trollies ($11,000).
Di Jones (with help from husband Andy) and Mark Norrie picked up a good number of useful items that were donated by Montserrat Day Hospitals when one of their units recently relocated in Brisbane.
Di also visited NRH to accept the new endoscope reprocessing system from supplier Cantel (their team pictured below with NRH nurses) and provide some initial training for nurses. RACS funded the purchase using a donation ANZGITA member Terry Gavaghan secured from the the Ainsworth Foundation for the RACS Foundation's gastroenterology work in association with ANZGITA.
Deputy Chair Tony Clarke obtained the pro bono assistance of architect John Hanrahan during the design stage.
The drying cabinet was sourced as part of the unit build budget.
Pentax continue to support with the provision of endoscopes. Boston Scientific supplied a year's worth of accessories for three of our partner centres last year. Half of what is pictured below-right was sent to NRH by DAISI who provided us space at no cost in a container they were sending to Honiara. 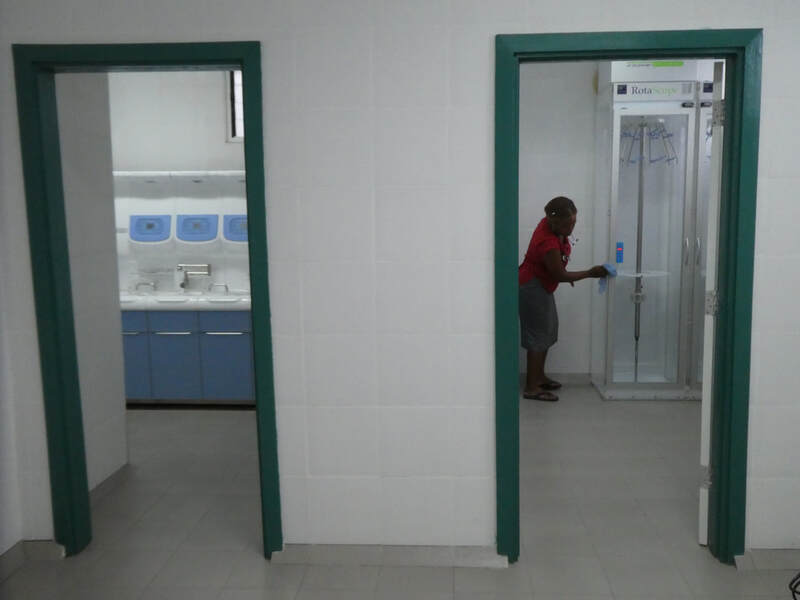 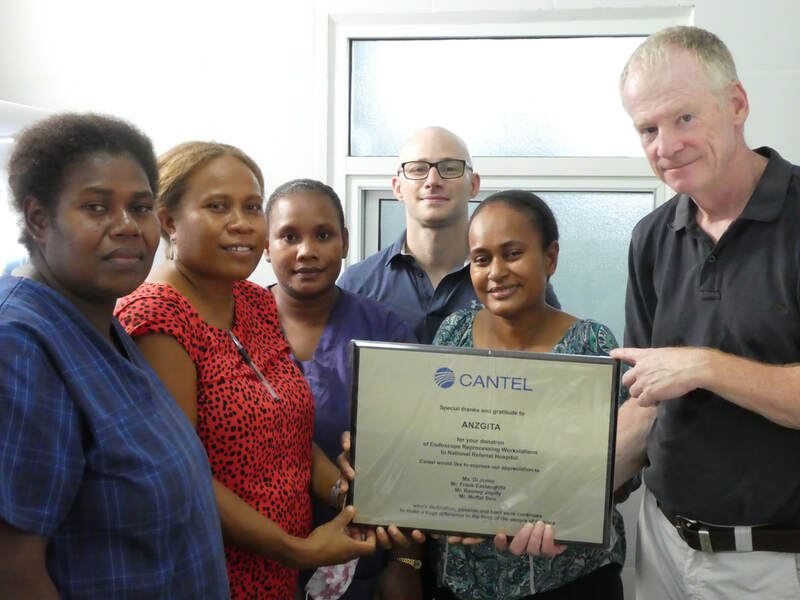 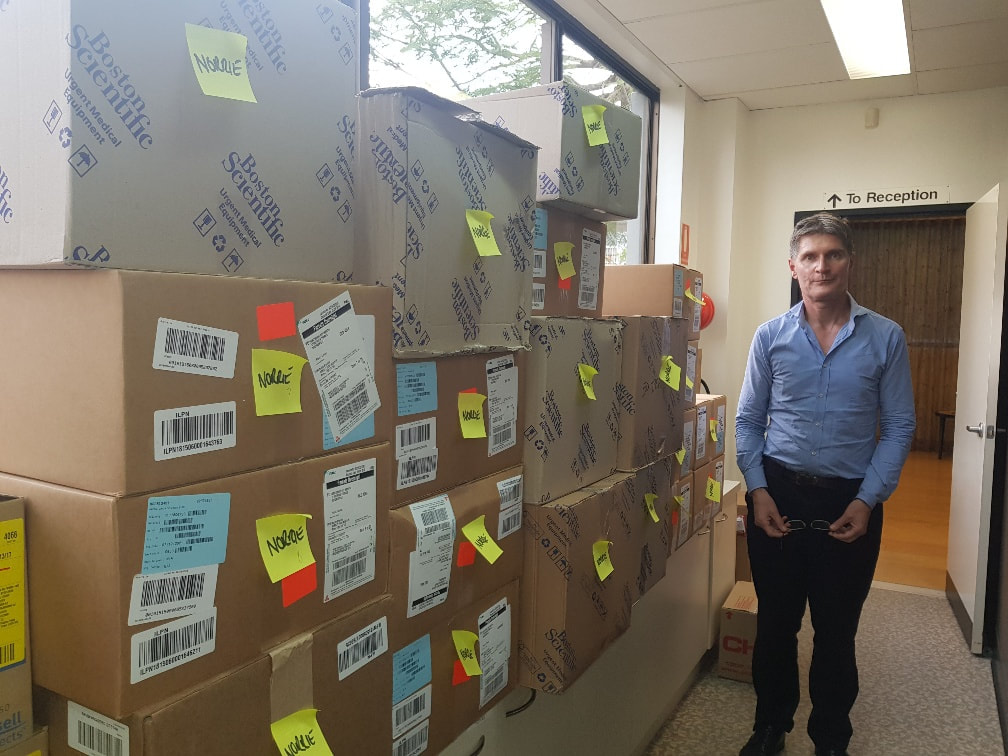 In May 2017 ANZGITA was approached to see if it could help with the management of a young man in the Solomon Islands who had required repeated hospital admissions having inhaled an aluminium beer can closure strip some two years earlier.  X-Rays had confirmed the closure strip was lodged in a bronchus and there was considerable associated inflammation and lung collapse.  It was felt by all those consulted that it would be unsafe to try to manage this problem in Honiara where facilities are very limited.  ANZGITA approached two Australian Hospitals to see if they could provide care for this young man on a pro bono basis.  ACT Health and Canberra Hospital was the first to agree to this, as did thoracic surgeon Dr John Tharion.
Obtaining a visa for this young man to come to Australia proved extremely time consuming but was eventually achieved with the patient arriving in Canberra in May 2018.  Bronchoscopy located and removed the closure strip which was not firmly imbedded in the bronchial wall.  However, after three weeks of intensive physiotherapy and antibiotic therapy it was clear that the collapsed and damaged area of lung was not going to re-expand, and Dr Tharion elected to undertake a lobectomy to remove the affected region of lung to ensure the patient did not have ongoing bouts of infection.  The patient made a rapid recovery from his surgery and returned home to the Solomon Islands.
In addition to Dr Tharion and his medical and nursing team, many contributed to the successful care of this patient.  ACT Health and the Canberra Hospital kindly provided access on a compassionate basis.  Dr Jon Bromley and Ms Melanie Applebee both provided considerable organisational effort to arrange the admission and the support the patient needed.  The Solomon Islands High Commission and local Solomon Islands community gave the patient vital support and accommodation when he was not an inpatient.  ANZGITA thanks all of these contributors to the patient’s care, and is proud to have been able to facilitate his treatment.

In 2018 two intensive training programs, each a week long, were conducted. Multiple short programs are more suited to the NRH as they do not unduly disrupt operations in an environment where medical resources are always in high demand.

In 2017, the one-week program initially scheduled for November 2016 was postponed till March because of a Dengue Fever epidemic and then had to be cancelled because of the serious illness of one of the trainer’s spouse. However, the two week program in June was completed without difficulty with 4 doctors and 2 nurses providing the training, including both Program Leaders. It is suggested that in future years we offer two one week programs with a limited training staff to meet the needs of the local clinicians.

Pentax Australia has generously agreed to provide and support the equipment in the National Referral Hospital for the foreseeable future. Mr John Lovegrove from Pentax spent a week in Honiara at the time of the June 2017 program and developed a very strong bond with the local clinicians and is likely to be a strong advocate for ANZGITA and the NRH within Pentax Australia.

The visiting teams work closely with the medical superintendent, Dr John Hue and assist in developing processes to improve the service, troubleshoot issues, particularly relating to disinfection, as well as enhancing the skill levels and experience of the Solomon Islands doctors and nurses. Read Chris Hair's inspirational experience of one occasion when he worked with Dr Jagilly, the former medical superintendent, here.

A report by Di Jones extracted from the Society of International Gastroenterology Nurses and Endoscopy Associates (SIGNEA) newsletter on the 2014 visit can be downloaded at the bottom of this page.