​Finlay Macrae and others are keeping in touch with Myanmar colleagues both directly and indirectly when possible. They know we are ready to renew our engagement when circumstances allow. Very many healthcare workers have been involved in the Civil Disobedience Movement and the operation of every large hospital has been affected to some extent. Armed conflict is still occurring (DFAT advice), including on city streets, and the COVID-19 pandemic is reported as ‘out of hand’. At YGH there is little beyond emergency endoscopies being done and no nurses on-hand to assist or reprocess. A new professor will be appointed now that Prof Thein Myint has retired. Our thanks to him for his welcoming support over the years. Trainers who have been to Myanmar and formed friendships will no doubt be concerned with the situation. Please keep our Myanmar colleagues in your thoughts.
​ 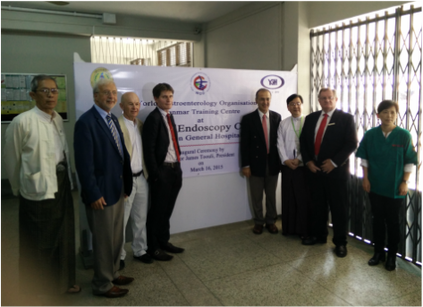 The National Endoscopy Training Centre was opened at YGH under the direction of Prof Thein Myint on March 16, 2015 at the start of the second program. It is now a designated WGO Training Centre.

​In 2018 we completed our seventh training program which, like some others, was held at a hospital outside of Yangon but in collaboration with YGH's training centre. Subsequently, YGH felt their internal training capabilities had progressed to the point where the type of program ANZGITA offered no longer met their needs. As our Foundation Project was also run in association with YGH, we ceased further activities on it. No further programs are planned at this stage, however we do remain in contact with colleagues and ready to discuss possible assistance.

In 2021 ANZGITA will again be providing capacity building training for colleagues in Myanmar. An agreement has been signed with University of Medicine 2 (UM2) which is associated with Thingangyun Sanpya General Hospital (TSGH) in Yangon.

Prof Than Than Aye, Director (UM2) of the Gastroenterology Department at TSGH, has led the discussions on behalf of UM2. It is envisaged that a number of training programs will be delivered over the next three years.

The initial program will be a course for nurses and will also include nurses from Mandalay General Hospital. Given the current COVID-19 situation, it will be delivered on-line from Australia using our webinar facilities. Detailed planning for the course will start now with a program start date announced in due course.
​ 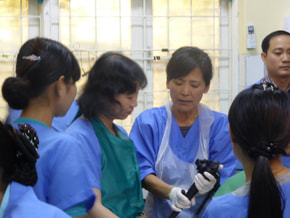 The 6th two week program was held at Thingangyun Sanpya General Hospital (TSGH) from the 6th to the 17th of November. The 1,000 bed hospital is 10km from central Yangon and is the teaching hospital for the University of Medicine 2. Five doctors and six nurses from ANZGITA delivered training working alongside three senior doctors from hospital. Thirteen doctors from six hospitals attended for training along with 31 nurses from nine hospitals.

For the first time, ANZGITA provided training in the advanced area of ERCP, a diagnostic procedure used to examine diseases of the liver, bile ducts and pancreas, and which provides important information that cannot be obtained by other means. It was well received. Another first was the production of a video covering equipment reprocessing procedures which was dubbed in Burmese for ongoing to use in training. It can be viewed below.

As on a some previous programs, visits were made by different teams to two District Hospitals. This time they were to Mawlamyaing Hospital and Pyay Hospital to review facilities and services and provide skills refreshers and updates for doctors who had previously attended TSGH. Two further nurses were trained in use of the review template during these visits.

The 5th two week training was held for the first time in Mandalay at the Department of Gastroenterology, Mandalay General Hospital (MGH) supported by the University of Medicine, Mandalay and the Mandalay University of Nursing. From April 2016, new clinics had been started for IBD (inflammatory bowel disease) and ERCP patients. 23 doctors and 44 nurses attended the training provided by a volunteer ANZGITA trainer team of 6 doctors and 4 nurses from Australia and New Zealand.  This program was exceptionally well received especially as it delivered hands-on training to a range of physicians and surgeons who would otherwise not be able to address the clinical demands in either diagnosis (e.g. cancer) or therapy (e.g. stemming fatal bleeding from bleeding ulcers of oesophageal varices related advanced liver disease). There were also visits to two associated regional hospitals enabling ANZGITA clinical directors to obtain a better understanding of the issues that confront these regional centres and to provide some initial advice.
Below is a Burmese language training video on manual endoscope cleaning produced by ANZGITA volunteer, Aimi Hino, with the assistance of colleagues at the Sanpya Hospital training program in November 2017.

Dianne Jones wrote a report for gastroenterology nurses on the 2014 initial visit which was published in the SIGNEA Journal. 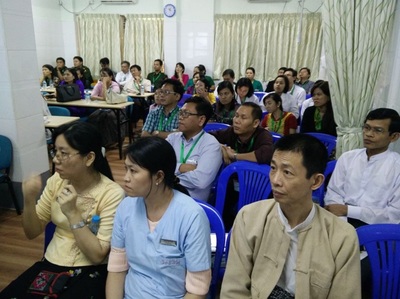 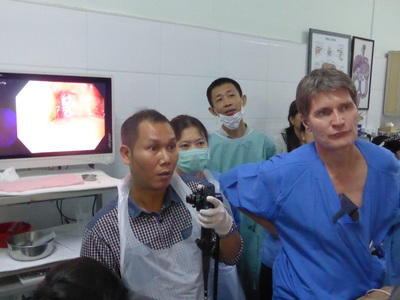 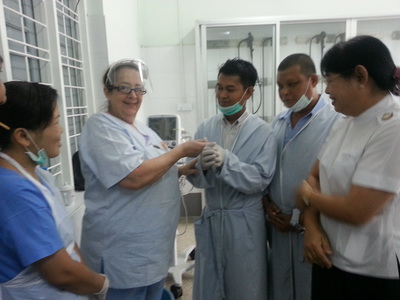