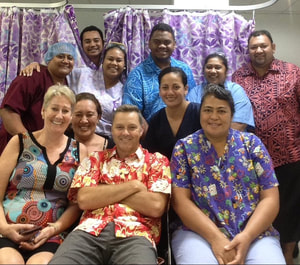 Trainers and Trainees at the conclusion of the 2017 visit
Samoa is located south of the equator, about halfway between Hawaii and New Zealand, with a equatorial/monsoonal climate. The population of just under 200,000 live on the two main islands of Savai’I and Upolu and eight smaller islands. Samoa is 104th on the Human Development Index (Fiji: 91 and Solomon Islands: 156). The capital city is Apia, where ANZGITA is partnering with the Tupua Tamasese Mea’ole Hospital (TTMH).

Between 2013 and 2016, 5 doctors and 5 nurses from Samoa attended the ANZGITA training program in Fiji. Under the Pacific Island Program (PIP) 2016-2021, which seeks to strengthen specialised clinical services across 11 Pacific Island Countries, one-week endoscopy training visits to TTMH have been conducted in 2017 and 2018. The National Health Service (NHS) of Samoa, the Royal Australasian College of Surgeons which manages PIP on behalf of the Australian Government and ANZGITA have worked together to plan and conduct these visits. In 2017, gastroenterologist Chris Hair and nurse Cathy Conway, who was one of the first two nurses to be involved in ANZGITA’s Fiji programs, were the trainers. In 2018, Chris returned with nurse Karen Kempin.
​
The objectives of the visits are in the areas of capacity building and strengthening of the systems employed to underpin sustainable service provision over the coming years. Read Chris Hair's reflection following a 2019 event.

Following is an example from Chris of enginuity that ANZGITA and our partners apply in circumstances where resources and facilities are simply not available but a way has to be found. Chris' comment is, "One of the hardest techniques to teach is 'reducing the loop' during colonoscopy.  In this case we've used a box to hide the loop from Dr Folo, who then attempts to reduce the loop by using the 'feel' of the scope, tactile feedback as the loop in the endoscope is first pulled back, and then rotated to straighten out.  "It cost us nothing to build this simulation, yet gave a learning experience that money can't buy."

Chris Hair and Karen Kempin in Samoa in March for a week (after a delay due to Cyclone Gita) to provide training and advice. Funding is by the Australian Government Pacific Islands Program which is administered by RACS. ​ 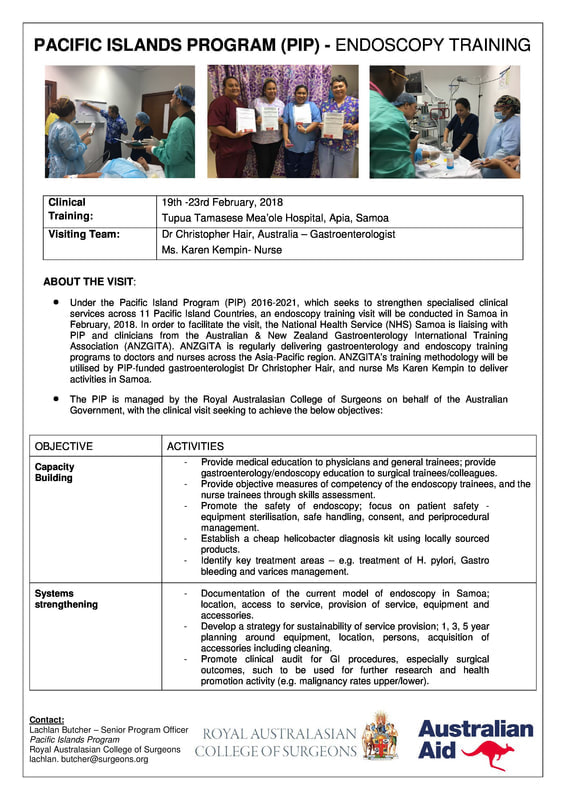