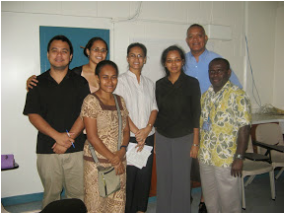 The 2008 Masters students in Fiji with Assoc. Professor Jioji Malani of the Fiji Medical School
ANZGITA was initially conceived by Professor Finlay Macrae after discussions in Suva with Professor Rob Moulds, one time Professor of Medicine at the Fiji School of Medicine. Rob and Finlay had been meeting for nearly a decade during periodic visits by Fin to the Gordon St General Practice to provide specialist consultative and endoscopy services.

Prior to 2007 there was no specialist training in the South Pacific islands, and doctors who decided to complete their training abroad were often reluctant to return home. The need to support local training for postgraduates and undergraduates by gastroenterologists through an organised program delivered in a public environment was articulated.

The project was thus born. The Australian team adopted the title of Gastroenterology Fiji Training Team (GeFiTT). Early on, it sought recognition from the Gastroenterological Society of Australia (GESA) and the World Gastroenterology Organization (WGO). The WGO welcomed this development in the region and included it as the newest of its WGO Training Centres around the world. These training centres are generally centres supported by first world national gastroenterology organisations delivering training in developing countries. Annual support (US$15,000 at present) has been provided by the WGO to support the centre. GESA was also supportive, but wished to remain administratively separate. 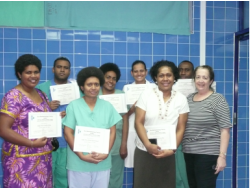 The GESA President (2013-15), who had always held an interest in GeFiTT, encouraged GeFiTT to incorporate in 2014 to enable us to relate better with other organisations, including GESA and the Royal Australasian College of Surgeons (RACS).  Recognizing that our interests are now also outside Fiji, we changed our name to Australian and New Zealand Gastroenterology International Training Association (ANZGITA), which recognises our primary mission as well as the support from team members in New Zealand.

ANZGITA is a public company limited by guarantee under the Commonwealth of Australia Corporations Act 2001. It is also a charity registered with the Australian Charities and Not-for-profitS Commission (ACNC).

As defined in our Constitution, the affairs of ANZGITA are managed by a Board of Directors appointed from our members at the AGM. There are no salaried executive officers and all members provide their time and services pro bono. Those eligible for membership are individuals who have directly participated on-site in delivering training programs and other individuals, as well as companies and organisations who support us in achieving our objectives. ​