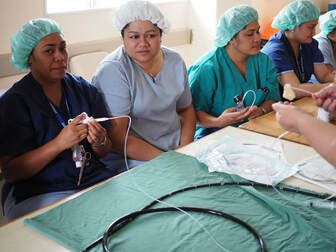 Tongan nurses practising snaring of polyps using a piece of bread
The Kingdom of Tonga is an island nation in the south Pacific comprising 169 islands spread over 700,000 square kilometres (slightly smaller than New South Wales) of which 36 are inhabited. It has a population of 100,000 of whom 70% reside on the main island of Tongatapu. Tonga stretches across approximately 800 kilometres in a north-south line. It neighbours include Fiji to the west, Samoa and Niue. It is about 1,800 kilometres from New Zealand's North Island.

​
​Tonga Training in the News
​

Read about the work Assoc Prof Chris Hair and nurse Cathy Conway have done in Tonga with the endoscopy team at Vailoa Hospital in their local news.