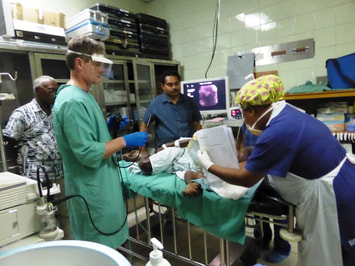 Honiara 2014. Dr Mark Norrie teaching
Current office bearers are: Other Board members and their areas of focus are:​

Finlay was appointed to the ANZGITA Board in September 2014 as the founding chair. In 2007, he initiated the World Gastroenterology Organization (WGO) Training Centre in Suva, in partnership with colleagues from the Fiji School of Medicine. He led the formation of the Gastroenterology Fiji Training Program (GeFiTT), a group of Australian and New Zealand medical professionals, which from 2008 has run a fully subscribed annual 4 week intensive training program at the centre. GeFiTT's activities have now been subsumed into the incorporated ANZGITA. The Fiji model was replicated in Myanmar in 2014, fostered by former Board member Prof Htut, with the opening of another WGO Training Centre. Prof Macrae is an active ANZGITA trainer.

Prof Macrae is, or has recently been, a director of the Victorian Clinical Genetics Service and the International Society for Gastrointestinal Hereditary Tumours. He works closely with state and federal authorities especially with respect to the roll out of the National Bowel Cancer Screening Project, and the PBS/MSAC.

Assoc Prof Chris Hair, Deputy Chair
Chris Hair MBBS (Adelaide), BSc, FRACP is a physician and gastroenterologist. He is a consultant gastroenterologist with Geelong Gastroenterology and Geelong Hospital; a clinical senior lecturer at Deakin University Medical School; and co-director of the Physician Training Programme in Geelong. Chris has worked closely with Finlay Macrae in a voluntary capacity over a number of years supporting GeFiTT activities and the development of the ANZGITA initiative covering training model, curriculum development, fellowship support and donations management.

​Chris is ANZGITA's Training Programs Leader and has assisted in training programs in Fiji, Solomon Islands, Samoa and Timor-Leste. Chris is the leader of ANZGITA's Pacific Gut Club webinar program and has been a co-director of the WGO Training Centre for the last four years in Suva, Fiji in conjunction with Fiji National University where is has recently been appointed adjunct professor. He is a member of the World Gastroenterology Organisation committee for Endoscopy Training Centres and Chair of GESA's Sustainable Network Committee. ​Dr Hair consults from the Epworth Hospital Waurn Ponds and performs procedures at the University Hospital Geelong.

Mr. Alan Studley, Treasurer
Alan Studley MBA, FAICD, FCPA was appointed to the ANZGITA Board in September 2014 as the inaugural treasurer. Alan is also a non executive director of Access Community Health, Wayss (Family Violence & Housing Support) and Alexandra District Hospital. He has worked for multi national companies in the fields of manufacturing, media, technology and food production. His roles have included Finance Director, CEO and Executive Chairman in companies in these fields as well as in large acute care health facilities, public transport related services and a federal government trust responsible for national heritage assets.

​In the past he has been a director and trustee of Metropolitan Ambulance Service, Royal Guide Dogs for the Blind Association of Victoria and Australia, Aware Super (Health Super), Royal Victorian Institute for the Blind and ASX listed Sausage Software Pty Ltd and Anteo Diagnostics Ltd. He has acted as a Surveyor, Australian Council of Healthcare Standards and was a member of the Dept Human Services , Strategy Steering Committee I2T2.

Mr. Frank Eastaughffe, Secretary and Public Officer
Frank Eastaughffe was appointed to the ANZGITA Board in July 2015 as secretary and public officer. Frank is an NFP company director and NFP volunteer. Previously he worked in senior management and technical positions in the telecommunications and IT industries, based in Australia and Europe. His qualifications are in Engineering and Computer Science. Frank was previously a consultant to the NFP organisation Mission to Seafarers Victoria and later a director, where he had the roles of secretary and public officer.

Her engagement in voluntary work with ANZGITA and its GeFiTT predecessor is long standing and extensive. In 2009 Dianne, together with Cath Conway, established the first nursing component of the program, training both nurses and doctors. In 2014 she trained nurses and doctors at NRH Honiara in association with the Solomon Islands Living Memorial Project run by San Diego State University. In 2014 Dianne established the nursing component of the first Myanmar program at Yangon General Hospital and trained nurses and doctors. In 2015 she returned on the next ANZGITA program and further expanded the training program for nurses. Dianne was appointed to the inaugural ANZGITA Board in September 2014 and has responsibility for nursing liaison and logistics.  Dianne has been a Board member of the Society of International Gastroenterology Nurses and Endoscopy Associates since 2008 and President since 2009. In 2012 she was awarded the Order of Australia Medal for services to nursing.

Peter has been the medical lead on AusAID funded field work in India, Vietnam and Indonesia from 1990. In 2008, he was a teacher and trainer at the inaugural GeFiTT program at the WGO Training Centre in Suva. He continues to be actively involved in that program and its extension to Myanmar from 2014. He was appointed to the ANZGITA Board in September 2014 and has responsibility for training curriculum.

Assoc Professor Katelaris has wide ranging and active clinical research interests, particularly in acid-peptic disorders. He has published over 250 scientific papers, book chapters and abstracts and has over 20 years experience in clinical therapeutic trials. He is a co-author of Asia-Pacific and Australian clinical guidelines on specific acid-peptic disorders and has been a member of a Global Working Group.

Peter has been chair of the Scientific Program Committee for Australian Gastroenterology Week. He is currently an Australian representative to the Asia-Pacific Association of Gastroenterology. He has been on the GESA Research Committee overseeing grant funding, and was formerly Vice Chair of the Digestive Health Foundation, the educational arm of GESA.

Mr. Jonathan Long
Jonathan (Jon) Long is a director of Crockett & Co. Pty Ltd and has worked in the medical devices industry for over 30 years. His career was initially in telecommunications and industrial electronics before moving to biomedical engineering and instrumentation. He worked in a variety of positions for many years with C.R. Kennedy, a major distributor of gastroenterological equipment in Australia.

Jon's voluntary work with GeFiTT and now ANZGITA has resulted in highly supportive arrangements with the device industry. He has taken the lead in sourcing and maintaining equipment. Jon has been involved with the Fiji training programs in 2013 and 2015 where he has been responsible for equipment availability, training and support. He was appointed to the inaugural ANZGITA Board in September 2014 with responsibility for device industry liaison.

Jon's voluntary work has also included cyclone relief in the Philippines with Rotary in 2012 and 2015 and the Ulpinyali Project in NT with Rotary.

Dr Robyn Nagel
Robyn Nagel MBBS, PhD, FRACP is a gastroenterologist in private practice in Toowoomba, Queensland. Robyn graduated in medicine at Melbourne University in 1977 and completed her specialist physician qualifications in 1984. She spent 5 years in post-graduate study in England, the first two in Shrewsbury, Shropshire in a general Gastroenterology Unit. The following three years were spent researching liver disease at the King’s College Liver Unit, London. Robyn worked with Queensland Health at the Royal Brisbane Hospital Gastroenterology Unit in 1990 and Toowoomba Base Hospital from 1992-2002 and has been engaged in private practice in Toowoomba since 1992.

Robyn is a Fellow of the Royal Australasian College of Physicians, member of the Gastroenterology Society of Australia (GESA), the Crohn’s and Colitis Association and the Continence Foundation of Australia and a Senior Lecturer at the University of Queensland. She was awarded her PhD from the University of Queensland in 2016 (her thesis was entitled “Are Blastocystic species clinically relevant to humans”). She is an Associate Professor with the School of Medicine at Griffith University and a recent graduate of the Australian Institute of Company Directors. Her areas of special interest include inflammatory bowel disease, coeliac disease, pelvic floor dysfunction and incontinence and medical and corporate ethics.

Robyn is our Programs Coordinator. In that role she is be responsible for organising all our in-country training programs and working with the Program Leaders for each country on successful program delivery. She also works with Chris Hair on our overall education activities and coordination with the virtual training and mentoring activities he leads. Robyn was a trainer on the second ever Fiji training program in 2008.

Prof Michael Schultz
Michael Schultz MD & PhD (Germany), FRACP is the Head of the Department of Medicine of the University of Otago, a Consultant Gastroenterologist at the Southern District Health Board, and in private practice at Mercy Hospital, Dunedin, NZ. Michael studied Medicine in Germany and undertook further education in the UK. He worked as a postdoctoral fellow at the University of North Carolina, Chapel Hill, USA and completed his specialist training in Internal Medicine and Gastroenterology in Regensburg, Germany. Michael joined the University of Otago in 2005 and was promoted to Professor in 2018. He was appointed to the ANZGITA board of directors in 2021 and is also the director of the GutHealthNetwork (www.guthealthnetwork.com) a multi-disciplinary research theme of the University of Otago.
Michael’s research portfolio spans from bench-to-bedside with a main interest in Inflammatory Bowel Diseases. He is involved in fundamental research on gut-microbe interaction using state-of-the-art organoid cultures but also works on health delivery and disease monitoring using eHealth technologies. He has published over 200 papers, book chapters and abstracts and leads one of the largest clinical trial centres in Gastroenterology in New Zealand.
​
Prof Schultz is Medical Advisor and volunteer for Crohn’s and Colitis New Zealand, is the New Zealand Ambassador for IBDpassport and joined ANZGITA in 2019. Michael served on the executive committee of the New Zealand Society of Gastroenterology for several years and was their President from 2016-2018. He is also on the guidelines group of the World Gastroenterology Association.