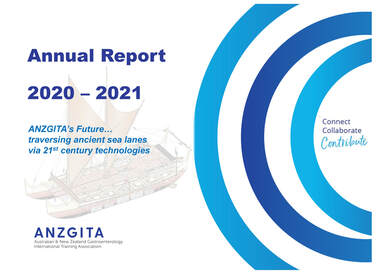 The ANZGITA Annual General Meeting was held as a Zoom webinar on Monday 11 October at 6pm (AEDT). There were 31 in attendance. The meeting was chaired by the ANZGITA Chair, Professor Finlay Macrae AO. The recording of the full meeting including our guest speaker (see below) is available here.

The five retiring directors, Dianne Jones, Jonathan Long, Peter Katelaris, Michael Schultz and Frank Eastaughffe, all renominated. There were no other nominations for six up to vacancies.  The five nominees were declared elected by the Chair.

Finlay reviewed the 2020/21 year and noted that the organisation had been continuously active despite the cessation of travel due to COVID. He referred members to the Officers' Reports for detailed information on the activities of the organisation. In looking to the future, Finlay spoke of the opportunity to improve our training and mentoring services by integrating the virtual programmes which had developed significantly over the last two years with the traditional in-country training.

Finlay thanked industry supporters and donors and referred everyone to the Annual Report publication where there is more information. He also thanked his fellow directors, program leaders and those who had contributed to the virtual programs delivered during the year.

Peter Katelaris thanked Finlay for his leadership and considerable contributions to the success of ANZGITA since the first Fiji program in 2008. He believed he spoke on behalf of the meeting and everyone who has worked with Finlay over that period.

The guest speaker, Dr Christina Higa, Co-Director, Pacific Basin Telehealth Resource Centre at the University of Hawai’i, covered the development and future of tele-health, which for her covers both tele-education for medical professionals and delivery via the Internet of healthcare services to consumers. A video of her talk and the subsequent discussion is available here. Interestingly, she sees potential for significant benefits to medical professionals in the short and medium term with broad consumer acceptance of telehealth as a longer-term outcome.

Formal Minutes will also be prepared for members.